ICYMI, fashion is back. The shows are happening at Paris Fashion Week right now and Off-White just held their first IRL event in 16 months. Yes, the entire collection was fire, but Bella Hadid’s looks at Off-White’s Fall/Winter 2021 presentation really stole the show—and opened it, for that matter!

The ready-to-wear collection, titled “Laboratory of Fun,” featured a star-studded lineup of models that included Joan Smalls, Honey Dijon and Amber Valletta. Given the brand’s virality, I pretty much expect there to be a slew of stars at the Off-White show every season. The Hadid sisters, Kaia Gerber and Kendall Jenner have all made appearances on the runway in the past.

This time around, the supermodel set did not disappoint—but honestly, Hadid’s opening look was my personal favorite. After weeks of exclusively seeing shades of sage green and lavender on my Instagram timeline, this shocking blue hue felt refreshing.

Her first look was completed, naturally, with a pair of coordinating knee-high blue boots. Excuse me while I swoon. 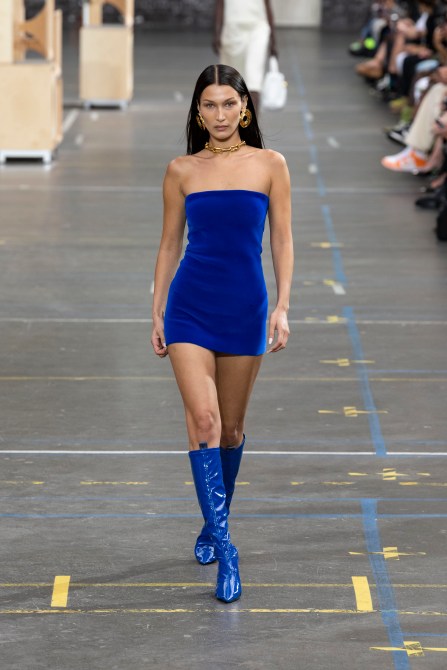 But honestly, would you expect anything less from designer Virgil Abloh, who also serves as the Artistic Director for Louis Vuitton’s menswear collections?  Off-White has become known across the Internet for its logo-heavy creations and hypebeast aesthetic over the years, but this brand-new collection felt decidedly minimalist and fresh. Even the brand’s infamous arrow print was made miniature, displayed on pillowy handbags rather than splashed across the backs of jackets.

But back to Bella in blue: After opening the show in the aforementioned micro-mini dress, the supermodel returned to the runway wearing a longer gown in the same hue. This new iteration featured a boxy silhouette on top that fed into a flowing velvet skirt and lots of chunky gold jewelry. 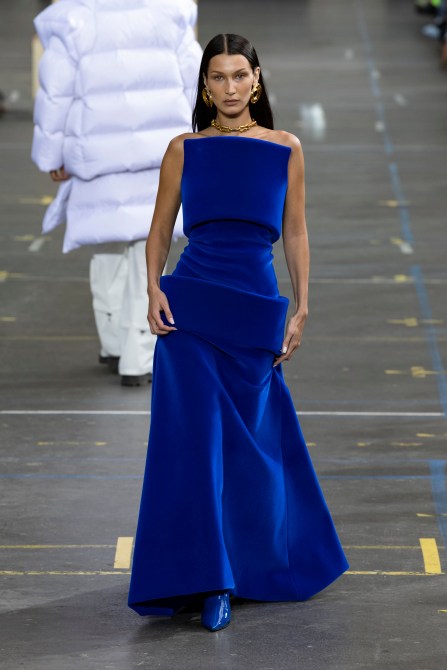 Sure, Hadid rocked not one but two stunning blue velvet looks, but the rest of the collection relied heavily on shades of black, white and beige. Other pops of color were present in the form of a vibrant orange leather blazer, a shocking yellow oversized suit and flowy silver suiting option that was, in a word, stunning.

When coming up with this new collection, Abloh looked inward, according to an interview with Vogue: “I was writing in my journal that Off-White should be adult. What does it mean to be a young brand in its seventh, eighth year?” he said. “I’ve already said that it’s a youth brand adjacent to streetwear—and I get frustrated if I don’t feel an evolution and the message becomes monotonous. I feel the world’s changed,” he added, referencing the Black Lives Matter movement in part.

As for the rest of the shows, the fashion didn’t stop at Off-White—and good looks weren’t limited to the runway. While attending a Louis Vuitton Parfum dinner in Paris, Hadid rocked a sequined black-and-blue mini dress that featured mermaid-esque discs of fringe at the hem. 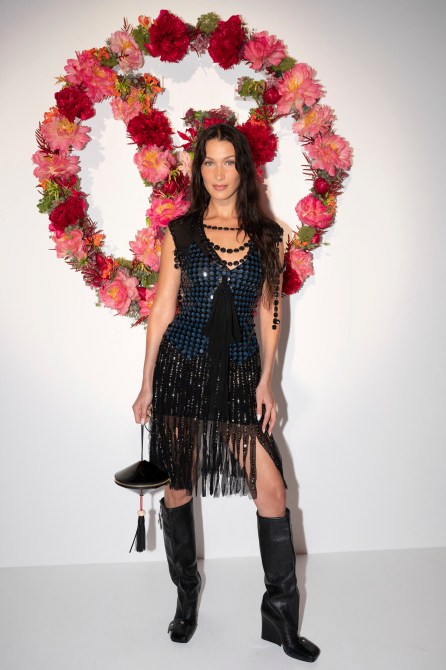 The model again showed off her obsession with knee-high boots at the dinner, but the Vuitton version came in black instead of Off-White’s bright blue and featured a square toe and a much slouchier silhouette.

You already know that I’m a massive fan of Bella Hadid’s street style, but it was nice seeing her back in her element on the runway while in Paris this weekend. With so many shows coming up on the calendar this season, I simply can’t wait to see where she pops up next—and what she’ll be wearing!

7 unique egg decorating ideas for you to try this Easter

Secrets of the BIG Dogs!

Magical Keys to Self-Mastery | Creating Miracles in Your Life